"Brilliant pianist, phenomenal ensemblist and first of all - a great musician!" 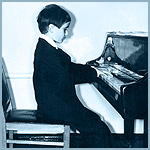 Dmytro Sukhovienko was born in Cherkasy (Ukraine) in 1972 and in the tradition of highly talented young musicians devoted himself to protracted intensive studies in his formative years. He began playing the piano when he was seven years old, attending the Kyiv Lysenko Special Music School for eleven years with Sofia Dobrzhanska. He studied for five intensive years at the National Kyiv Conservatory with Vsevolod Vorobyov who transmitted to Dmytro his profound passion for pure interpretation in the tradition of Felix Blumenfeld, thus making Dmytro Sukhovienko one of the last to carry on the great tradition of the Felix Blumenfeld Piano School, whose famous attendees included, among others, Vladimir Horowitz. 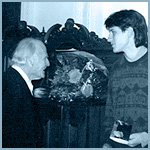 Dmytro Sukhovienko obtained more recognition after his participation at the Menuhin Festival in Gstaad in 1996. The following year, he won First Prize at the International Music competition in San Bartolomeo in Italy and Second Prize at the International Clara Schumann Piano Competition in Düsseldorf in Germany. After listening to Dmytro Sukhovienko at the Biarritz Music festival in 1998, Pierre-Petit wrote in “Le Figaro”: “it is a name to remember”. Philippe Entremont said “Dmytro Sukhovienko is the most promising talent he has heard in the last 30 years”. 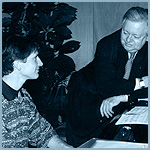 In 2004, under the patronage of UNESCO a documentary film about Dmytro’s life as a pianist was released.

He has been applauded at prestigious concert halls such as the Concertgebouw in Amsterdam, Bozar in Brussels, the Casino in Bern, UNESCO in Paris. Dmytro Sukhovienko also plays chamber music with, amongst others Pierre Amoyal, Michael Kugel and works with such conductors as Dmitry Sitkovetsky, David Josefovitz, Tougan Sokhiev.

In 2005 Dmytro became a Bösendorfer artist. That led him to the brilliant debut in one of the most prestigious music halls in the world - the Musikverein of Vienna.

In 2017 Dmytro performed with Alissa Margulis the Complete Violin Sonatas by Beethoven.

Since 2018 he teaches at the Music Academy in Sint-Niklaas and is a guest professor at the Antwerp Conservatory.

In 2022, Dmytro gave masterclasses at the International Summer Academy of Music in Ochsenhausen (Germany).